From GRFSpecs
(Redirected from NML:Graphics)
Jump to navigationJump to search
NewGRF Meta Language

Overriding vehicles in other NewGRFs

Mind, while arguments 2 to 4 are called "optional", you can only leave them out starting from the end, but not skip only some in the middle. That is, if you want so set argument 4, you must also set arguments 2 and 3.

Note, while the third argument (the numerical id) is optional, it should only be left out in simple short-lived NewGRF. The numerical id is relevant for OpenTTD savegame compatibilty. If you delete items or insert items in front, the automatically assigned ids of following items will change, and thus your NewGRF will be incompatible to earlier versions of itself. So, if your NewGRF is not a one-shot, but will evolve over multiple versions, you should assign ids manually, and keep them unchanged.

This one looks a lot more complicated than it actually is. A property-block contains one or more assignments. Each assignment starts with the name of the property that is changed followed by a colon. After the colon follows the value and you end the line with a semicolon. The type of the value depends on the property, some properties require a string as value and some an expression. For some properties you can optionally specify a unit that is used to convert the value to the unit that is written to the output file. You can only use a unit if the expression is constant. List of valid units

A graphics block must be placed in an item-block. It allows to define the graphics for a particular item, as well as various callbacks. Callbacks are used to define various things at run time, based on information (variables) of the item itself. This provides a much greater degree of flexibility than setting properties. An example (using fictional callback names):

The callbacks that are available differ per feature, refer to the feature-specific pages for more information. The 'default'-callback is usually used to resolve the graphics. For each callback a return value may be specified, in the same way as for switch-blocks. Note that all callbacks have to be defined in a single graphics-block.

For vehicles and stations, a cargo type (identifier from the cargo table) may be used as callback name, to provide cargo-specific graphics. 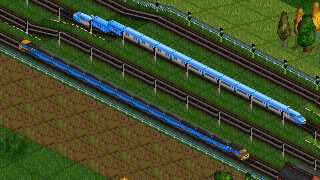 A livery override block offers the option to change the look and behaviour of a wagon depending on the engine it is attached to. It is basically the same as a graphics-block and its syntax is the same. The difference is that it only applies to a particular combination of an engine and a wagon. E.g. passenger wagons could adapt their livery to match the engine, to make the consist look like a multiple-unit train. The spritegroup needs to be defined before it can be used in a livery override. A livery override block is always part of the engine definition and looks like

For an example see the spritegroup